Although all daycare centres have to operate under government guidelines, there is a difference in the quality of services offered. Some are essentially babysitting services while others prepare the chid for the next stage in his or her development.

Centre Éducatif La Sagesse offers a superior and comprehensive program using sophisticated techniques to help the child develop social skills and prepare them for entry into the regular school system. At the same time, the children learn self-sufficiency as well as becoming bilingually proficient in English and French.

La Sagesse came into being when business woman Helen Chen bought an existing daycare centre in 2011. As a mother of four she had had experience with local daycares and was very disappointed with the service she had received. Her goal was to provide a centre with high quality care and education. Her first move was to hire Adela Szulzinger as director.

Szulzinger comes with top-notch qualifications. She has had thirty years experience in the child care field. In addition to her practical experience, she has also taken a three-year course from Vanier College in Early Childhood Education as well as courses in business management.

To Szulzinger this is truly a labour of love.

“I got into the field almost by accident” she says, “I had started working as a cook at a daycare in the West Island when one of the educational staff became ill and I was asked to fill in temporarily. I just loved working with the children and decided at that time to make a career of it.”

Since that early experience Adela Szulzinger has worked continuously in early childhood education. She has spent fifteen years as an educator in West Island Centres, including five years at the Pierrefonds Community Centre when she became the coordinator of the “Early Childhood Program”. In 2000, she was contracted to open new home-based daycares, producing ten new centres. In 2008, she accepted a position as consultant for a chain of daycares in Switzerland where she introduced the Québec Early Childhood Program – at the same time training their educators in the system.

At Centre Éducatif La Sagesse the program is designed to give individual attention to each child. By working with small groups, the bilingual educational activities teach the youngsters life skills and social interaction. They learn how to relate to other people and at the same time autonomy and self help are promoted. All learning is done in a fun way using special games, toys and songs. Infants are exposed to frequent activities to aid in their development. 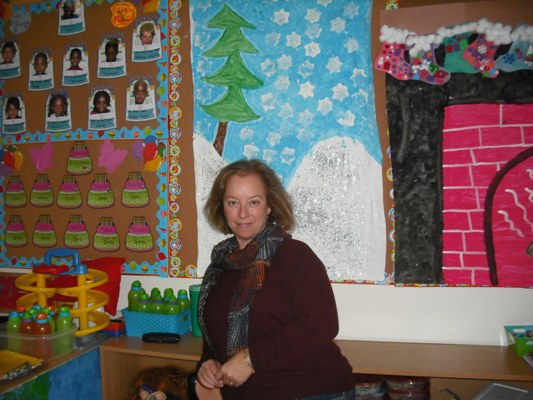 Adela in a room of the daycare

“We do everything to replace the stimulation the child would receive at home. This is a critical part in their intellectual development to prepare them for school and to succeed in society. In addition, our program will make the children fluently bilingual in French and English. Our educators are proficient in two or more languages. They are all devoted professionals who take a personal interest in their young charges. Proper nutrition is essential, so all meals are prepared on the premises following the Canadian Food Guide. Menus for babies are prepared according to the individual needs of each infant according to age.”

For more information on government daycare subsidies go to www.revenuquebec.ca